From autonomous drones to driver-assist cars and shopping carts that can check you out of a supermarket without standing in line for a cashier, artificial intelligence is set to change our lives.

But it doesn’t just happen. In order to function, artificial intelligence needs to recognize millions of traffic hazards, or airborne objects, or items in a supermarket by comparing them with labeled images stored in its memory.

Dataloop is the first company to figure out how to combine and automate much of the process behind the “computer vision” that allows these applications to work – saving time and resources.

The four-year-old Israeli startup estimates its software is already used by most of the labeling providers. Its clients include LinkedIn, Intel, Toyota and Vimeo – a leading developer of automatic video creation tools powered by AI.

“Creating the artificial intelligence these platforms need to operate requires showing machines many examples – hundreds of millions in some cases – and constantly updating those examples as the reality changes,” says Dataloop co-founder and CEO Eran Shlomo.

Today, those images are largely labeled in third world countries, where people sit before computer screens digitally marking trees, power lines, pedestrians, animals – or whatever a client needs. Human developers use that labeled image bank to create a model on which the program’s operation is based. It is a long, costly and imprecise process.

“Dataloop is the first to combine the strengths of data-generating people in places like India and Sri Lanka with machines like cameras and sensors into one data flow that constantly processes, analyses and inputs these examples and, when an event requires human intervention, calls for help. This joint, real-time human-machine cooperation has created the first continuously learning platform and is expected to set a new industry standard,” Shlomo says.

Dataloop is expected to finish 2021 with 300 percent revenue growth, and the company expects that growth rate to increase with the public release of its data pipeline product in early 2022. Existing customers report a remarkable 80 percent reduction in labeling cost and time after replacing existing in-house, largely manual systems, with Dataloop’s platform. The company is raising a new investment round through OurCrowd, the Jerusalem-based equity investing platform.

“Machine learning is crucial in helping us automatically identify the quality of content published on LinkedIn. That’s where Dataloop comes in. Their intuitive platform speeding up our detection processes,” says Shubham Agarwal, senior applied research engineer for LinkedIn.

The global data annotation tools market was valued at $1 billion in 2020 by Global market Insights, driven mainly by the automotive, retail and healthcare sectors. The research company predicts at least 30 percent annual growth until 2027, when it is expected to reach $7 billion, with labeling automation solutions leading this market.

“We love working with Dataloop,” says Paul Jacob, head of Data Quality for Standard Cognition, which specializes in AI-powered checkout systems. “Their data management platform allows us to simultaneously ensure multiple projects are labeled, tasked and QA’d regardless of where our workforce is based.”

Other companies are trying to compete, but observers say Dataloop has a significant head start in this fast-growing sector.

“Many companies are doing data annotation, but most focus on manual tools. Only Dataloop adds a ‘neural network’ system that constantly deploys data back into the system to continually improve it. I don’t know anyone else doing that,” says Gideon Shmuel, a venture partner in London-based Downing Ventures. “And because they’re the first in a market that is just beginning, theirs will also be the first in voice annotation and other apps that are only now coming to be.” 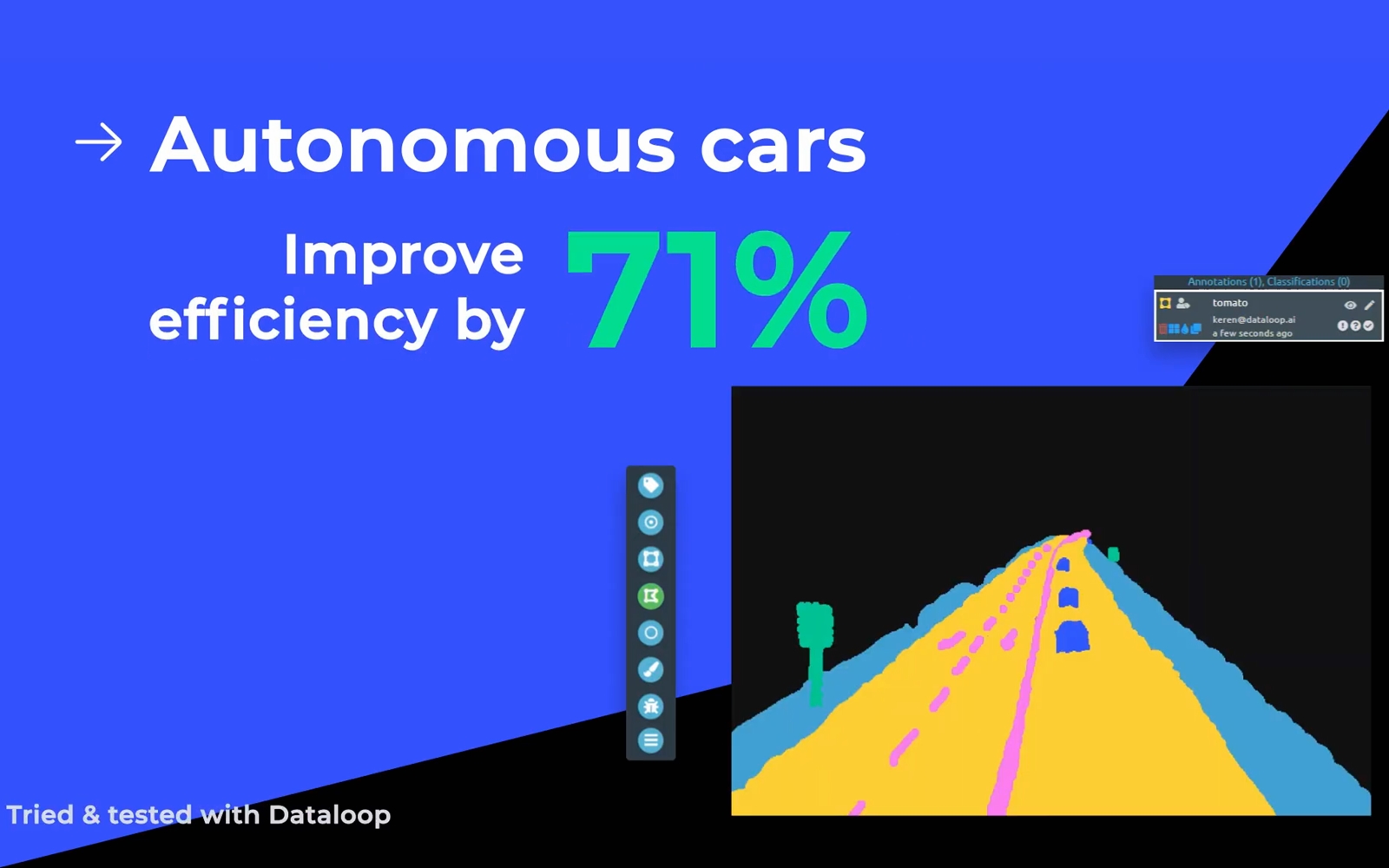 Accuracy is another of the company’s strengths. “If you make a query on a search engine and one out of ten results are garbage, it doesn’t really matter. But that would be totally intolerable in traffic,” says Shmuel. “It’s that last 10 percent that’s the hardest,” and it’s where Dataloop excels “in deployment, not just in demos.”

The need for human intervention will likely decline as the performance of AI models improves. It is unlikely, though, that humans will be cut out of the loop entirely. Many problems – like self-driving cars – are just too complex to be fully automated, Shlomo says, stressing his company’s commitment to maintaining jobs in economies that depend on them.

“We built Dataloop for a combined human-machine future,” Shlomo says. “While we don’t expect humans to go out of the loop, it is our job to minimize the intensive labor process into a human touch and guidance process. That’s what we’re known for.”

“The team at Dataloop provides a powerful platform with a suite of tools. Thanks to Dataloop, we’re able to successfully test our algorithms and improve our ADAS and autonomous driving features” says David Lempert, VP R&D for Foresight Automotive, a leader at the forefront of the autonomous vehicle industry.

One of the company’s next steps, Shlomo says, will be to offer Dataloop’s labeling software without charge. “Our real profit lies in processing the data on the cloud. Providing the software for free sets us up to do that,” he says.

In cloud processing, Dataloop will go head-to-head with Amazon and Google. Shlomo is not fazed by the prospect. The digital giants “have a big hole in their computer vision services,” he believes.

Ultimately, Shlomo predicts, Dataloop will be bought by another major cloud provider, or exit through an IPO. “It’s just too early to sell. We’re the best at what we do, and the offers are only getting better as time goes by,” he says.

For more information about investing in Dataloop through OurCrowd, click HERE.